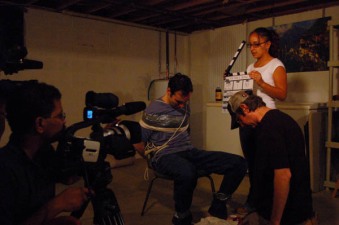 Movie making seemed like a distant unattainable idea when I was a lad in the 90’s.  Then one day I saw Clerks.  I couldn’t believe something like this was at my local video store next to Tom Cruise and Denzel Washington movies.  Don’t get me wrong – I love Clerks.  But the production value looked like something… well… I could do.

I began researching and learned the story of how Kevin Smith used credit cards to fund his $28,000 movie.  Then I read about Robert Rodriguez and how he made El Mariachi.  Still more accounts of low-budget filmmaking: The Evil Dead, Blood Guts Bullets & Octane, Open Water. They made it all seem so attainable.  And yet, it’s not.  Making a film is tough enough but you better have made the right film or you’re going absolutely nowhere with it.  And after making two independent films of my own, I’ve got some tips to help you get there.

First, a disclaimer.  I’m talking about actual independent movies.  I’ll qualify that as under $100,000.

1. Read everything you can on distribution

Start at the end.  Seriously.  Before you even start writing the script.  If you want to make a great movie that does absolutely nothing for your career, ignore this step.  If you actually want to have a career you will start with this.  The only reason you’ve heard of any of the movies mentioned above is because they got distribution.  If a distributor doesn’t think they can sell your film they won’t buy it from you.  It doesn’t get much simpler than that.  I can’t stress this point enough.  In fact, all my following advice stems from this one idea.

And don’t just trust that your movie will be so good that it will get into Sundance and some random distributor will be there to buy it.  Sundance ain’t what it used to be.  It’s full of “studio indies” staring at famous people, made by famous people.  You’ll be making the rounds at many festivals if you’re lucky.  Many of them won’t be attended by acquisition people.  But you can use any festival attention as P.R. later to attract distributors.

Sorry to be obvious but it’s true.  Learn how to write screenplays.  And I don’t just mean formatting.  Learn structure.  Go buy Save the Cat or something.  To me, the structure has everything to do with attention span.  Without these structural beats and turning points your movie will meander, people will get bored, and turn your movie off.  You can’t afford to be boring.  You don’t have 20 million dollar stars to hold the audience’s attention.

What should be in my brilliant script?  Glad you asked.  Going back to the distribution angle you should look for obvious attractors.  Things like sex, nudity, beautiful people, violence, action, witty dialogue.  These are the things that will show up in your trailer (not the nudity).  Your trailer and your poster will be massively important.  Remember, sell, sell, sell.

But I want to write quirky family dramas or comedic period pieces you say.  I understand that.  Believe me, I do.  But few people care about forbidden gay cowboy love unless the cowboys are played by Jake Gyllenhaal and Heath Ledger and shot on 35mm film by Ang Lee.  I’m not saying it won’t work but the risk becomes that much greater and we’re trying to minimize risk. Unless you’re truly willing to die on that hill save that for your next movie—if you get the chance to make one.  For now, pick a commercial genre.

Don’t forget to push the envelope.  Indie movies are where we find things that Hollywood doesn’t have the balls to make.  That can be a plus.  Don’t mistake my push to make a salable film for making normal Hollywood fare.  I’m not telling you to make a popcorn movie.  I’m not telling you to be safe or generic in any way. Quite the opposite. I’m telling you to make a water-cooler movie.  This is the kind of movie you sit around with your friends and discuss, quote, debate, days, even years after you saw it.  They don’t all even have to like it, just remember it.  Who doesn’t remember what is in the box at the end of Se7en? Or how the guys talked in Swingers?   Or whatever was going on in that Human Centipede movie I refuse to watch.  That’s water-cooler gold!  That’s when you turn from an unknown filmmaker into the guy who made that movie.

That probably won’t be possible.  But if you have the ability to get even a B-level star to do a cameo, do it.  Hell, even D-level.  Distributors feel more comfortable with name stars, or at least a semi-recognizable face for the box.

One thing you want to avoid is casting actors that look similar to each other.  Every face in your indie movie is new.  The audience has to drink it in.  If your movie is full of 20-year-old white guys with black hair they might get confused as to who is who.  Cast all ages and ethnicities.  It helps your movie look bigger.  Another selling point is having a lot of minorities.  That sounds like a strange thing to say but I’ve quite literally been asked by a distributor if my cast was primarily Hispanic or black.  They were looking for a market to sell the movie to.  A lot of audiences are not getting what they want at the cineplex.  Distributors know this.

4.  Take a crap-load of pictures

A distributor will require somewhere around 200 high-resolution photos.  Not behind-the-scenes photos.  Not posed photos of the actors smiling for the camera.  Actual pictures taken of the stars in action.  You’ll take these photos during your rehearsals on set.

One of these could turn into your poster.  And you will be responsible to create your own poster.  But once a distributor picks up the movie they’re most likely going to ditch your poster and create their own based on those 200 photos you took.  So grab a good photographer with a great camera.  You probably know someone already.  If not, craigslist is a good place to find one.  A college student looking to get experience will work for peanuts.

You’ll be trying to get as much as you can for free.  Something will be easier than others.  The easiest thing to get: food.  The hardest thing to get: money.  So here’s a neat little trick.  If you ask someone to donate $100 to your movie they will most likely say no.  However, if you ask someone to help by picking up lunch they will gladly pay well over that $100.  I can only guess the reason is that filmmaking is foreign to people.  Paying for lunch on the other hand means they can see exactly where the money goes.  Depending on the size of your cast/crew you can actually eliminate your food expenses.  I did.

Other things you can get for free: camera rental, tape stock, locations, actors, crew, and musical score.

This doesn’t seem as hard to impress anymore since most prosumer camcorders are HD and very affordable.  You want the clearest possible picture.  A camera that does well in low light.  And I highly recommend the ability to use multiple lenses.  A shallow focal length can make your close-ups so pretty and professional.  Meanwhile, most of your sets won’t look big enough, so a wide-angle lens can help break your movie up so it’s not all medium shots.

It’s all about lighting.  Good lighting can help provide mood and make your film look professional.  Bad lighting looks like a high school project.  If you can’t spring for a pro-DP, gaffer, and lights, head to the home depot.  You can get a host of good lights for the cheap.  If you’re smart about lighting you can make it work.  (look into purchasing dimmers.  get some diffusion & gels too)

Camera moves look professional.  If you can’t afford a dolly or steady cam, look for other ways to fake this.  A wheelchair, a car.  I pulled a kid’s wagon apart to build my own doorway dolly.

7.  Use someone else’s money

I too went the Kevin Smith credit card way to fund my movie dreams.  Both of them.  I don’t advise it.  Sure it got my movies made but debt sucks.  Movies are risky.  There’s no guarantee you’ll make your money back.  In fact, the odds are against you.  Use someone’s money.  And while you’re looking for investors, keep refining that script of yours.  It can always be better.